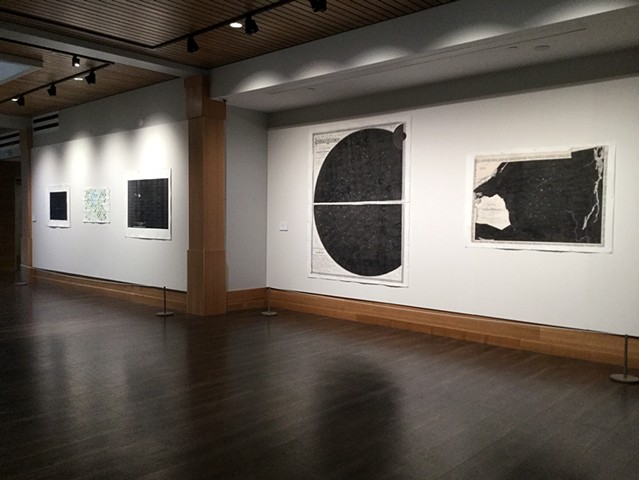 Installation view at the Rivers School 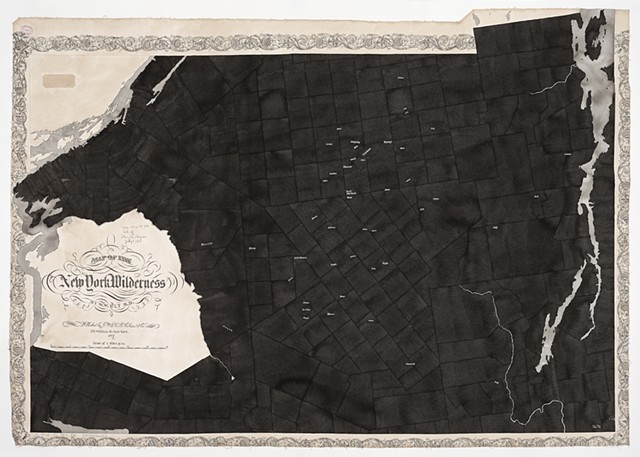 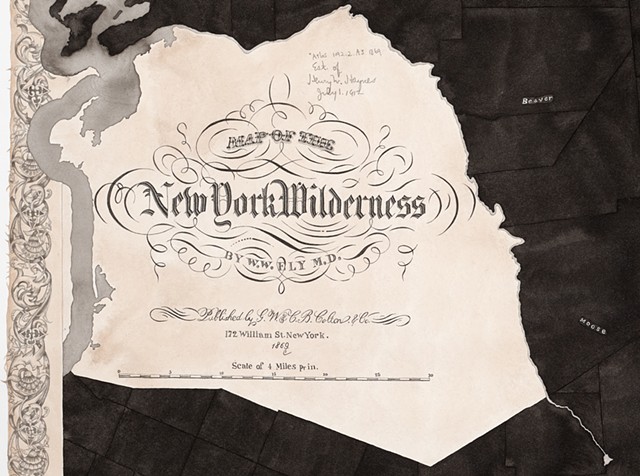 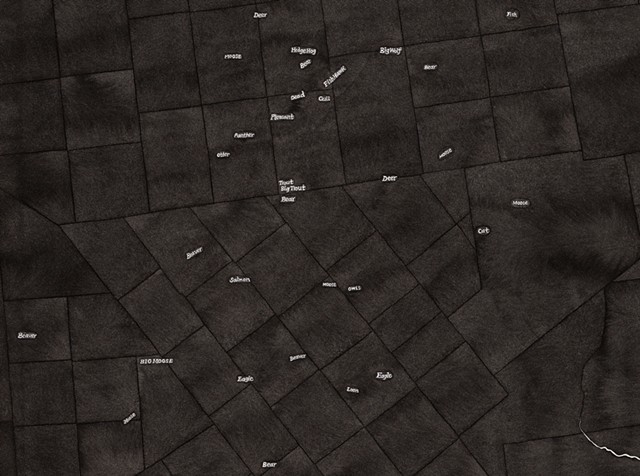 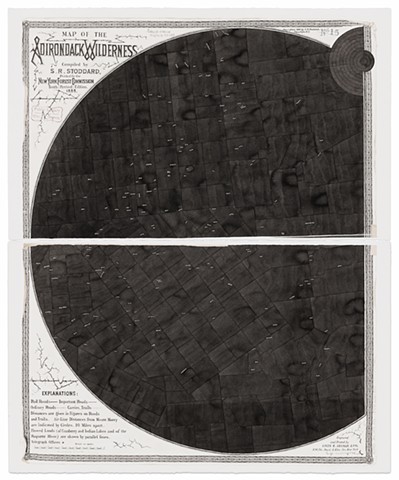 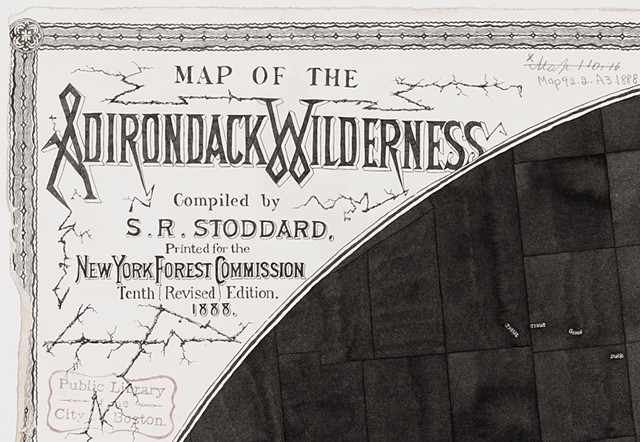 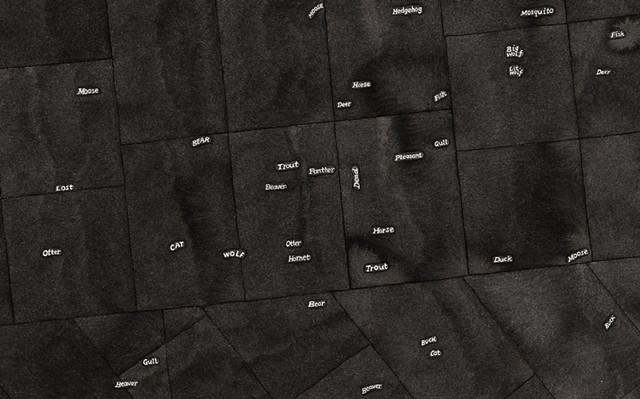 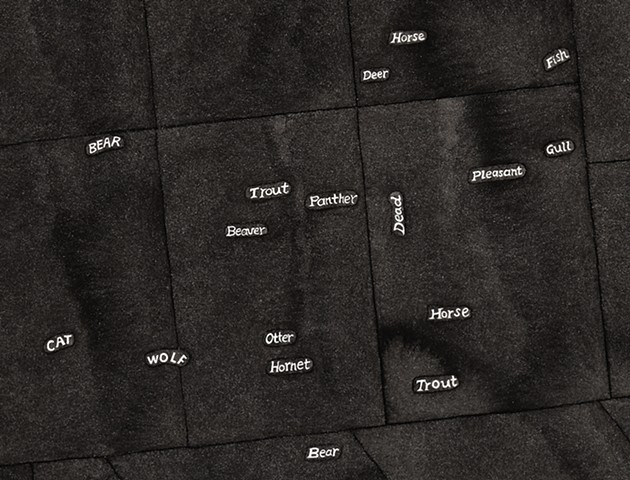 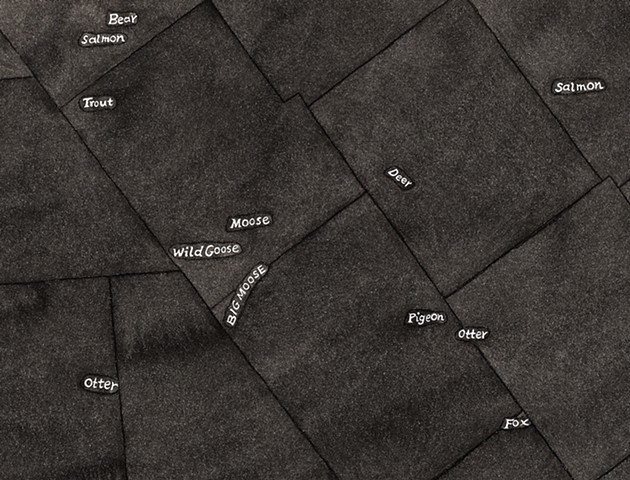 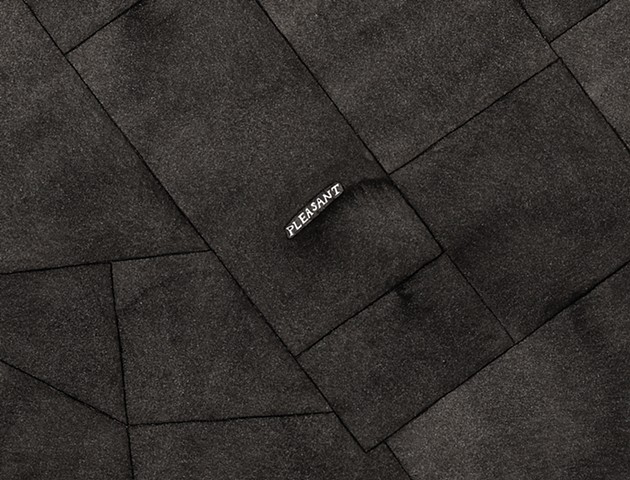 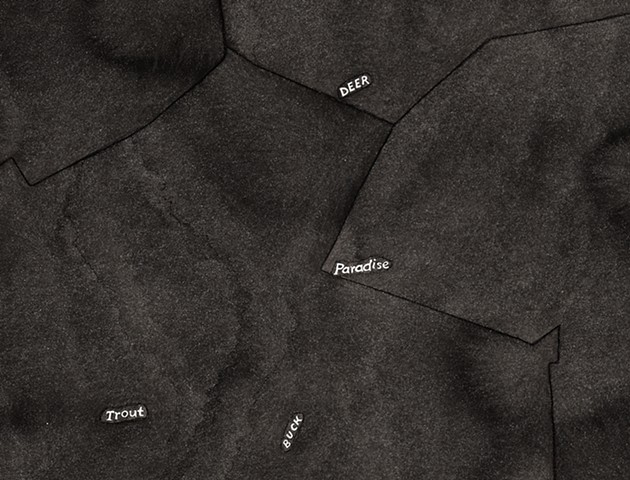 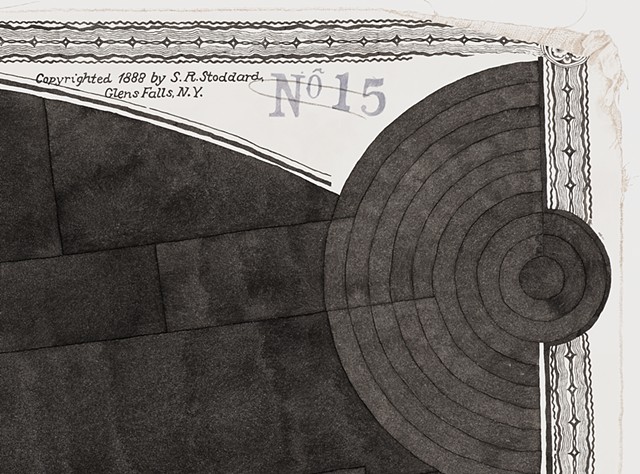 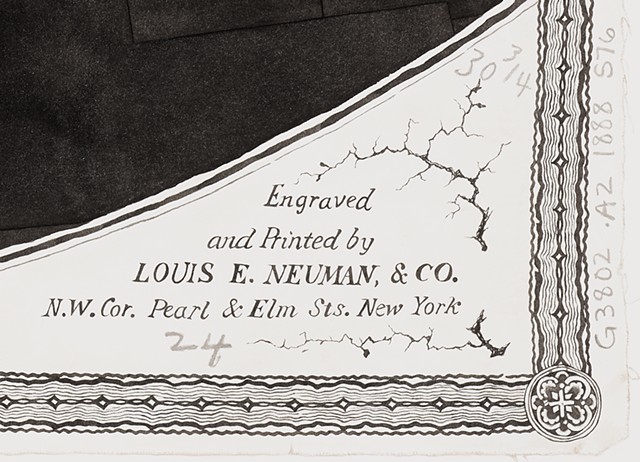 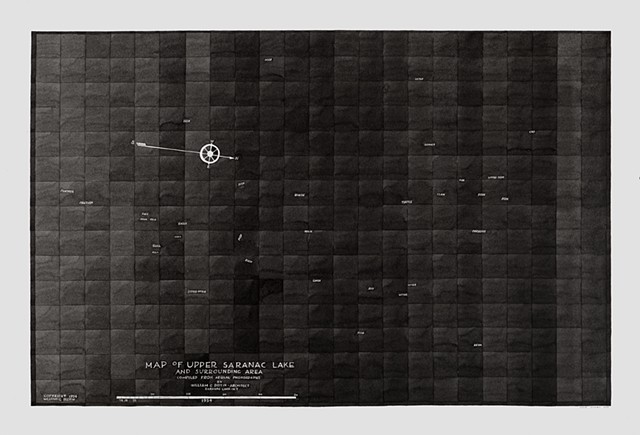 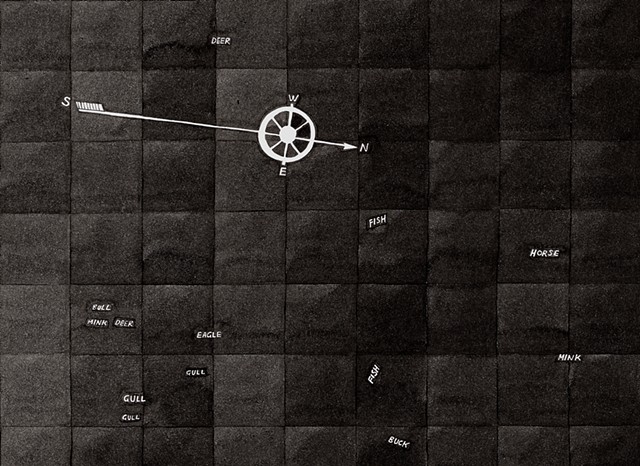 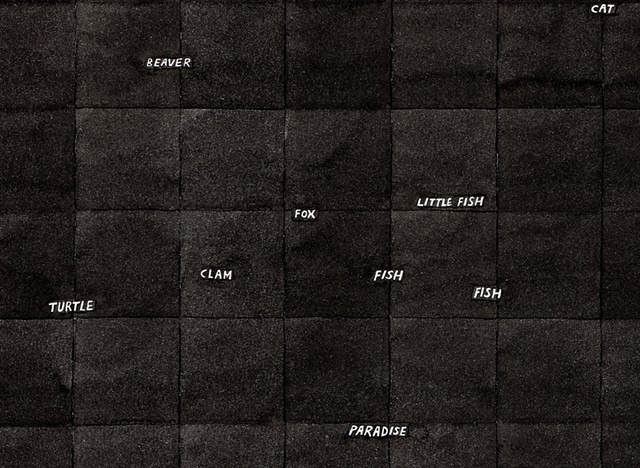 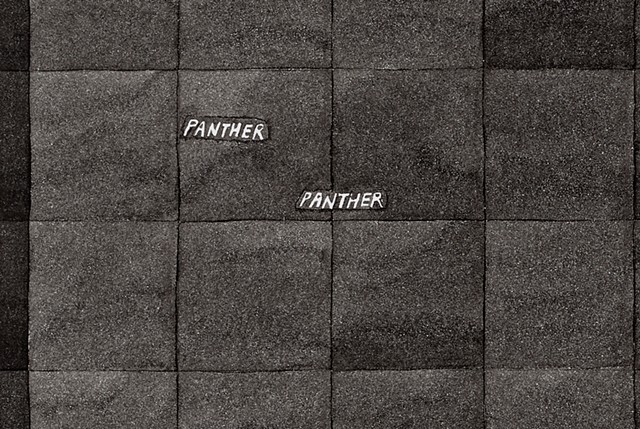 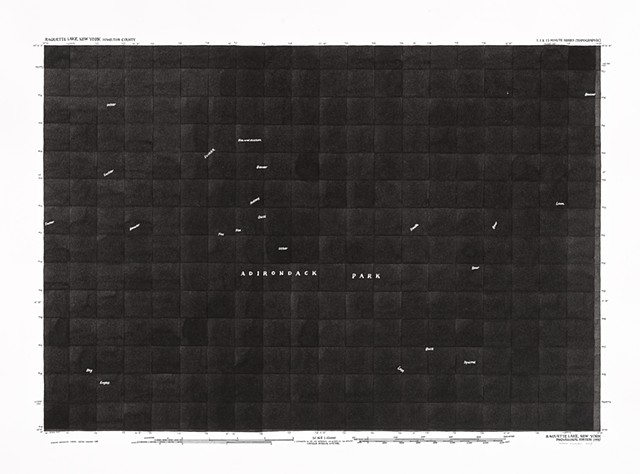 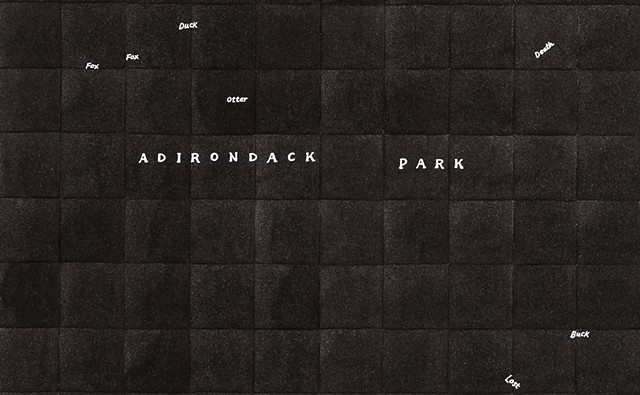 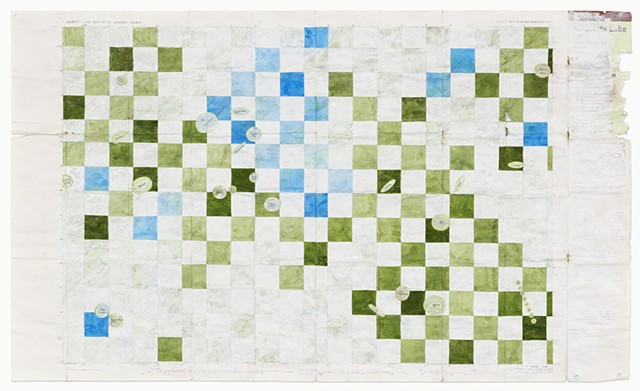 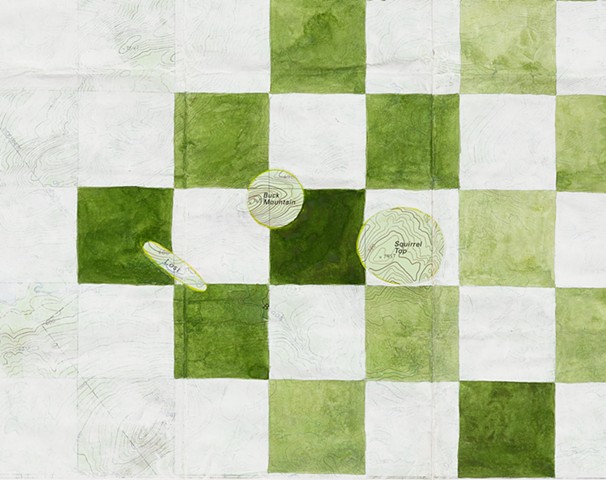 Extinction Studies is an ongoing series of conceptual drawings based on historical maps of the Adirondacks in Upstate New York. Monochromatic black ink drawings are created by tracing copies of the original maps by hand. The drawings include the names of geographic areas that were named after the wildlife, such as “Eagle Lake,” “Little Otter Pond,” “Buck Mountain,” “Beaver Brook,” and “Salmon River,” but only the animal names appear within the European grid systems of mapping land. The animal names in my drawings were not painted, but left untouched revealing the white of the paper. This is somehow important to me. In my work, the animal names float as tiny white specs in a sea of blackness, as if to form constellations in the sky. Only the titles of the maps and some cartographical information were left visible. The grid systems were used by colonists to measure and rearrange the land that was taken from Indigenous people who had very different relationships with the land. Maps reveal but also hide. They tell stories.

The Adirondack Park and its six million acres were established as a protected region from deforestation in 1892. Wilderness was already in decline from wide-spread deforestation by the 1850s as the European settlers cut down trees for lumber, charcoal, paper, tanning, and iron ore mining—all for profit and financial growth. Conservation efforts were already needed by then due to the considerable damage done.

In 1864, George Perkins Marsh (1801 –1882) published Man and Nature, an instrumental move to preserve the Adirondacks by raising awareness about the many ecological consequences from deforestation, diminishing capacity to hold water from loss of wetlands, accelerating runoff, and soil erosion. Mr. Marsh warned that if “another era of equal human crime and human improvidence were to take place, total extinction of the human species was quite possible.” In the midst of the climate crisis and its disastrous consequences Marsh’s words from 167 years ago echo with the most alarming tone. Humans are capable of turning a blind eye to what has been wrought in the pursuit of capital.

Extractive and transactional relationships with the natural world view nature as separate from humans. Grief and sorrow for the past and perhaps for the future are expressed through monochromatic tones in my work. The lands fragmented by the grid lines remind us of the histories and systems that foster transactional relationships with nature and certain mental models—humans as separate from nature and superior to all other species. And these animals that are highlighted in my works witnessed changes over time—some of the species survived, and others didn't. More about the Adirondacks: In 1885, the Adirondack Forest Preserve was prompted by the public outcry over declining water quality and the deforestation of the land in the Adirondack region. Today’s Adirondack Park, a six-million acre parcel of public and private lands, was established in 1892 to protect the region from uncontrolled deforestation.

Once unknown and unexplored by the early Europeans, this area was referred to as “the Dismal Wilderness” by the area’s Indigenous people, and was shown as a blank space in a 1771 map. By 1850, the European settlers had destroyed enough of the Adirondack forest that it became a growing concern for the public, “as the continued depletion of watershed woodlands reduced the soil's ability to hold water, hastening topsoil erosion and exaggerating periods of flooding.” The lumber industry alone was not responsible for the deforestation, the tanning industry used the hemlock trees, the paper industry used spruce and fir, and the charcoal industry used all sizes and kinds of timber.