“Library” was created during my tenure as artist-in-residence at the Broad Institute of MIT and Harvard. Observations made during my residency at this biomedical research institute made me feel more aware of the sense of compressed time. What I mean is that how we experience time, and that the things are moving at a very fast speed. For example, the Human Genome Project took 13 years to complete and it cost 2.7 billion dollars. It was completed in 2003. Today, sequencing of the human genome takes a day or two, and costs less than $3,000. Scientists were telling me that the experiments which used to take a decade now takes much shorter time period, much the same case as sequencing the human genome.

How did we get here? This was one of my first thoughts which led me to investigate the beginning of medical history.

Fascinated with this papyrus, I created a number of works combining images of magic spells with current scientific information, including the paper on the Human Genome Project (published in 2001), and numerous other writings I traced from the whiteboards around the Broad Institute.

My projects at the Broad explored the interconnectedness between knowledge and belief, while bringing forth forgotten ideas—like the magic spells once considered legitimate. What have we lost? What do we still believe? What do we hope to find? These ancient spells—indecipherable to the untrained eye—operate also as formal visual elements, like technical scientific writing today that can sometimes seem at once beautiful and difficult for a layperson to understand.

In this piece, I used deaccessioned card catalog cabinets from the Harvard Fine Arts Library to house the petri dishes. These wooden card catalog cabinets are obsolete in the digital era. It was used to house information and data for research. I remember flipping through cards in the cabinet to find books when I was at college. Library as a house of knowledge and data, I wanted this piece to speak for a containment of knowledge, but also evoke a time that is past, forgotten, and even disregarded.

In a time when science, medicine, and technology are accelerating at a rate unprecedented in human history, I revisit our ancient beliefs and finds exploration as a recurring theme for scientists and artists alike, there is always the quest for discovery, knowledge, creation, and beauty. A quotation from T. S. Eliot’s long poem “Little Gidding” has been laser cut onto a wood panel and displayed, but then a backward version of this same text, lying over the inscription, makes it difficult to read. The same Eliot quotation concludes the paper on the Human Genome Project:

We shall not cease from exploration And the end of all our exploring Will be to arrive where we started And know the place for the first time. "Library" was exhibited as a part of my solo exhibition, “Lost and Found” at the Boston Arts Academy in the fall of 2017.

Throughout this exhibit, to point us back toward a cycle of exploration, I presented paradoxical ideas. Scholars believe that in ancient Egypt, when the Edwin Smith papyrus was written, the same content was recopied many times, spanning 200 to 300 years, and this means that the methods of diagnosing and treating patients did not change significantly. Only fifteen years after the sequencing of the human genome was completed in 2003, we’re talking about precision medicine. During recent decades, science, medicine, and technology have been moving at an exponential speed. How do we begin to comprehend a world which moves at this super-fast speed? For me, it was by looking back to see where we began, and in understanding that progress is never a straight line. 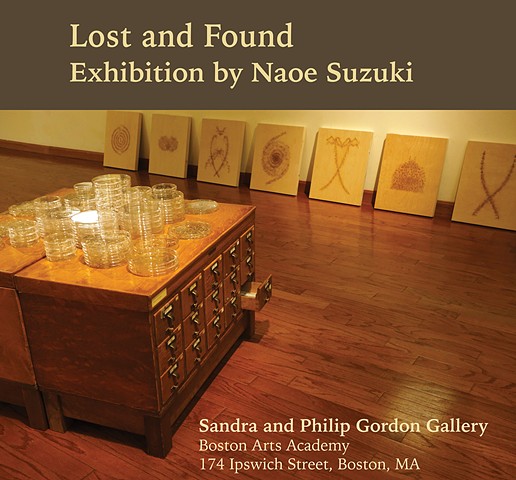